TPV is a company aimed at development and progress since the very beginning. We are aware that only new challenges can bring changes

Anton Podbevšek, the most prominent protagonist of the Novo mesto spring, a unique and bold initiator of the Slovenian avant-garde movement, and a model of Slovenian modernists, who introduced a lot of radical novelties on the Slovenian literary scene.

During a recent pulling down of a house in Ljubljana, they accidentally found the original copy of a literary rarity, a collection of poems A Man with Bombs annotated by Podbevšek, and typescripts of a corrected edition which was never published, and TPV at their 30th anniversary of operations and upcoming 100th anniversary of the Novo mesto spring decided to help to return it back to Novo mesto in cooperation with the Miran Jarc Library.

Returning the collection to the city of Novo mesto is an important act towards preserving cultural heritage on both local and national level as it has made it available to citizens of Novo mesto and other interested public in both physical and digital form. 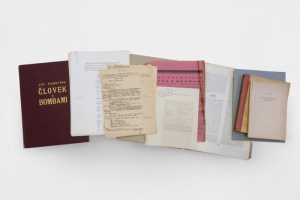 The literary collection along with some other rarities from Podbevšek’s heritage will be offered to the citizens of Novo mesto by Marko Gorjup, M.Sc., the president – Director of TPV Group, and on behalf of the citizens received by the Mayor of the Municipality of Novo mesto, Gregor Macedoni. The collection will find its place in special collections held in the library in Novo mesto.

The ceremony of handing the collection followed by a rich cultural musical program will be held on Wednesday, 5 June 2019, at 18:00 in the atrium of Miran Jarc Library in Novo mesto. Admission free.

This website uses cookies to improve your experience while you navigate through the website. Out of these, the cookies that are categorized as necessary are stored on your browser as they are essential for the working of basic functionalities of the website. We also use third-party cookies that help us analyze and understand how you use this website. These cookies will be stored in your browser only with your consent. You also have the option to opt-out of these cookies. But opting out of some of these cookies may affect your browsing experience.
Necessary Always Enabled
Necessary cookies are absolutely essential for the website to function properly. This category only includes cookies that ensures basic functionalities and security features of the website. These cookies do not store any personal information.
Non-necessary
Any cookies that may not be particularly necessary for the website to function and is used specifically to collect user personal data via analytics, ads, other embedded contents are termed as non-necessary cookies. It is mandatory to procure user consent prior to running these cookies on your website.
SAVE & ACCEPT
Scroll to top