As part of of the 37th International Conference on Organizational Science Development held this week in Portorož, Thursday 22 March was dedicated to the business excellence. The same day was held the event called »Business excellence of organisations«, coorganized by the Faculty of Organizational Sciences Kranj, Ministry of Economic Development and Technology, Metrology Institute of the Republic of Slovenia, Ministry of Public Administration, Chamber of Commerce and Industry of Slovenia and Chamber of Craft of Slovenia.

At the ceremony for the 20th anniversary of the PRSPO Act and first PRSPO award, a special attention was paid to all fifteen PRSPO award winners so far. The Business Excellence Award of the Republic of Slovenia is the highest recognition given by the Government of the Republic of Slovenia for the achievements in the field of quality of business performance as a result of development of knowledge and innovation as wll as continuous improvements which make Slovenia more successful and competitive. The award winners are important ambassadors of business excellence in Slovenia. In recognition for their cooperation in the area of business excellence, they were given compliments. This year, the so far award winners have been joined by the Ljubljana University Medical Center.

TPV has also been one of the winners of this highest national recognition as it was conferred in 2011. At yesterday event, we received two recognitions: compliments for our contribution to the excellence in Slovenia given through our example and reputation, and a diploma on the twentieth anniversary of PRSPO for a special contribution to integration of our employees into the assessment commission. 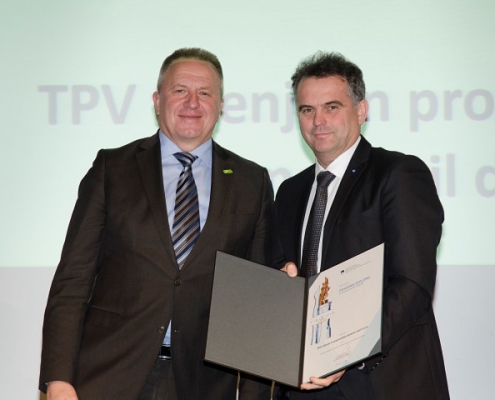 TPV met with the model of excellence at the very beginning of its implementation in Slovenia (1997-1998). The model was recognized as an upgrade of quality standards as it offered a broader view of the company’s operations. TPV have continuously supported the development of excellence by actively integrating our assessors into the assessment procedures (Bukovec, Košak, Gorjup, Erenda, Jevšček, Petrič), which had a significant effect on implementing the approaches in the development of the company. In 2007, a decision was made at the strategic conference to upgrade the then existing management systems with the EFQM excellence models. In the period 2008 – 2009, they carried out two internal self-assessments, and in 2010, the first application for tender PRSPO made and submitted. TPV became a finalist and received an award for special achievements in the field of innovation and learning, and in 2011 when submitting the application for the second time, they became a PRSPO award winner. TPV continues to use the EFQM model as a basis for development and improvement (strategy updating, change of vision and mission) even after receiving the award.

TPV has been acting actively in the field of development and promotion of business excellence for many years. The Director – President of Management, Mr. Marko Gorjup, M.Sc. is also a member of the PRSPO Committee, chaired by the Minister for Economic Development and Technology, Mr. Zdravko Počivalšek. Prior to Mr. Gorjup, this function was held by Mr. Vladimir Gregor Bahč. Anton Petrič, the Director of Management Systems and driving force of this development in TPV, currently holds the position of the President of PRSPO Jurors Team. At the event, he also took part as a moderator at the round table »Business Excellence Ecosystem – government support, achievements and challenges«.

This website uses cookies to improve your experience while you navigate through the website. Out of these, the cookies that are categorized as necessary are stored on your browser as they are essential for the working of basic functionalities of the website. We also use third-party cookies that help us analyze and understand how you use this website. These cookies will be stored in your browser only with your consent. You also have the option to opt-out of these cookies. But opting out of some of these cookies may affect your browsing experience.
Necessary Always Enabled

Any cookies that may not be particularly necessary for the website to function and is used specifically to collect user personal data via analytics, ads, other embedded contents are termed as non-necessary cookies. It is mandatory to procure user consent prior to running these cookies on your website.